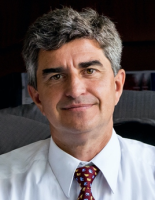 At the NANOCON´21 Prof. Dr. Yury Gogotsi will open the conference by a plenary lecture.

Education and Career Accomplishments:
Yury Gogotsi received his MS (1984) and PhD in Physical Chemistry (1986) from Kiev Polytechnic and a DSc degree from the Ukrainian Academy of Sciences in 1995.

Since the year 2000 he has been working at the Drexel University, Department of Materials Science and Engineering; from 2017 as the Charles T. and Ruth M. Bach Endowed Professor and Distinguished University Professor (from 2010). He also serves as Director of the A.J. Drexel Nanomaterials Institute.

Research interests:
Yury Gogotsi works on synthesis and surface modification of inorganic nanomaterials, such as nanodiamond, carbide-derived carbons, nanotubes, and 2D carbides and nitrides (MXenes). His research group also explores energy related and other applications of materials discovered and developed in Gogotsi Lab. His pioneering work (together with P. Simon) on the relations between the structure and capacitive performance of carbon nanomaterials led to a scientific breakthrough in the field and ultimately resulted in the development of a new generation of supercapacitors that facilitate the storage and utilization of electrical energy. Professor Yury Gogotsi was a part of the team that discovered a new family of two-dimensional (2D) carbides and nitrides MXenes that show exceptional potential for energy storage, water and biomedical applications. He developed a general approach to synthesis of porous and low-dimensional materials using selective extraction of elements/components, which can be used to generate carbide-derived porous carbons, carbon nanotubes, graphene, 2D carbides, etc.

He has been elected a Fellow of the American Association for Advancement of Science (AAAS), Materials Research Society, American Ceramic Society, the Electrochemical Society, Royal Society of Chemistry, NanoSMAT Society, as well as Academician of the World Academy of Ceramics and Full Member of the International Institute for the Science of Sintering. He also served on the MRS Board of Director, serves on editorial boards of more than a dozen of journals and is acting as Associate Editor of ACS Nano.