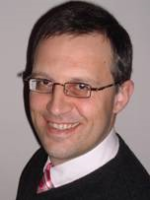 Position: Chair Professor of Photonics Materials at the Department of Physics and Materials Science, Director of the Centre for Functional Photonics, City University of Hong Kong, China

Education and Career Accomplishments:
Andrey Rogach received his diploma in Chemistry from the Belarusian State University in Minsk (Belarus) in 1991. In 1995 he received PhD from this university focused on „Formation and properties of silver nanoparticles in different media“. In the period 1995-2002 he worked as a research scientist at the Institute of Physical Chemistry, University of Hamburg (Germany), in the period 2002-2009 as lead scientist of the Photonics and Optoelectronics Group at the Center for NanoScience, Ludwig-Maximilians-Universität München (Germany). In 2009 habilitation in Physics at the Center for Nano Science on „Light emission and harvesting with semiconductor nanocrystals: Synthesis, spectroscopy and applications“. Since 2009 he is a professor and founding director for the Centre for Functional Photonics at City University of Hong Kong. Since 2011 he acts as an associate editor of ACS NANO web platform.

Research activities:
His research focuses on the synthesis, assembly and optical spectroscopy of colloidal semiconductor and metal nanocrystals and their hybrid structures, and their use for energy-related and optoelectronic applications.

Using the colloidal chemistry approaches A. Rogach and his research team synthesize semiconductor and metal nanorystals of variable sizes, shapes and compositions, tuning the emission of semiconductor nanocrystals and surface plasmon resonances of metal nanoparticles through the visible and near-IR spectral range. They apply optical spectroscopy to study energy transfer and charge separation in these nanostructures and look for different applications of semiconductor and metal nanocrystals, ranging from photovoltaics and water splitting to biological fluorescent labels and SERS substrates.

Publication activity & Awards:
He has authored over 350 scientific publications with an Hirsch-index of 89 recorded in Web of Science and 106 in Google Scholar with citation over 39,000, which ranked him as Highly Cited Researcher (Clarivate Analytics, 2018), and 51st worldwide among “100 TOP Materials Scientists of the Past Decade” by Thomson Reuters (2011). A. Rogach is the editor of the book “Semiconductor Nanocrystal Quantum Dots: Synthesis, Assembly, Spectroscopy and Applications”, Springer, Wien-New York, 2008 and the co-editor of the book “Complex-shaped Metal Nanoparticles: Bottom-Up Syntheses and Applications”, Willey-VCH, 2012.

His distinctions include the Carl Friedrich von Siemens Research Award of the Alexander-von-Humboldt Foundation (Germany, 2019), the Croucher Senior Research Fellowship (Hong Kong, 2018), the City University President’s Award (2017). Andrey Rogach is a Fellow of the Electromagnetic Academy (USA) and serves as an Associate Editor of ACS Nano since 2011.