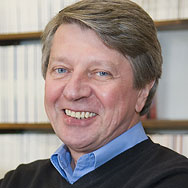 Specialization: Polymer Chemistry - the discovery of Atom Radical Transfer Polymerization (ATRP), a novel method of polymer synthesis that has revolutionized the way macromolecules are made.

Education and Career Accomplishments
Krzysztof (Kris) Matyjaszewski (*1950 in Konstantynów Łódzki, Poland) received his M.S. at the Technical University of Moscow, Russia in 1972, the doctorate from the Polish Academy of Sciences in 1976 and he completed a postdoctoral fellowship at the University of Florida in 1977. From 1978 to 1984, he was a research associate of the Polish Academy of Sciences. From 1984 to 1985, Matyjaszewski held appointments at the University of Paris, first as a research associate and then as a visiting professor. In 1985, he joined Carnegie Mellon, where he founded and currently directs the Center for Macromolecular Engineering. From 1994 to 1998, Matyjaszewski served as head of the Department of Chemistry. In 1998, K. Matyjaszewski was appointed the J.C. Warner Professor of Natural Sciences. In 2004 he was named a University Professor, the highest distinction faculty can achieve at Carnegie Mellon.

Research interests:
Krzysztof Matyjaszewski is an internationally recognized polymer chemist who is highly regarded for his vision, his leadership in education and his many collaborative research efforts that have yielded significant innovations in polymer chemistry. He is perhaps best known for the discovery of atom radical transfer polymerization (ATRP), a novel method of polymer synthesis that has revolutionized the way macromolecules are made. At the late 90ies he formed a research consortium with various industrial corporations to expand the understanding of controlled radical polymerization, including ATRP, and accelerate the transfer of this technology to different commercial applications. A second consortium, formed under his leadership in 2001, continues and expands these efforts, training university and industrial scientists in procedures for responsive polymeric material development. In total 58 companies from Europe, Asia and North America have been members of these consortia.

Publication activity and R&D results:
K. Matyjaszewski is a co-inventor on 61 issued U.S. patented technologies; he holds 154 international patents and has 36 U.S. patent applications pending approval. He has authored 23 books, 98 book chapters and more than 1.076 peer-reviewed scientific papers. His current Hirsch index is 179 (3/2019), his work has been cited in the scientific literature more than 90,250 times, making him one of the most cited chemists in the world.

One of the leading educators in the field of polymer chemistry, K. Matyjaszewski has mentored more than 200 undergraduate, graduate and postdoctoral students since joining Carnegie Mellon.