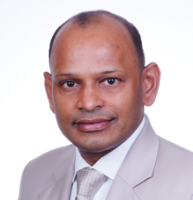 Position: Director of Centre for Nanofibers and Nanotechnology at the National University of Singapore (NUS); Vice President of Research Strategy of NUS

Specialization: Electrospinning and Nanofibers and their applications

Education & Career Accomplishments:
Seeram Ramakrishna (*1964, Cherukupalli, Guntur, India) received Master of Technology in Aircraft Engineering from Indian Institute of Technology, Madras, India, 1988; Ph.D. in Materials Science from the University of Cambridge, UK, 1992 and The General Management Training from the Harvard University, USA. Seeram Ramakrishna is a Professor of Mechanical Engineering and Bioengineering and serves as Vice President of Research Strategy at the National University of Singapore, which is ranked among the top 25 universities in the world.

Research Activities:
Prof. Ramakrishna is regarded as the modern father of electrospinning and nanofibers. He is known globally for his pioneering work on engineering nanofibers for regeneration of tissues and harvesting of sunlight. His research outcomes have been translated into products.

He is a Highly Cited Researcher in the world (Clarivate Analytics). Thomson Reuters recognized among the World’s Most Influential Scientific Minds.

Publication Activities:
He co-authored over 1,000 SCI indexed international journal papers and 7 authored books which received ~88,000 citations and ~ 140 H-index. A European study placed him among the only 800 researchers with H-index over 135 in the history of science and technology (http://www.webometrics.info/en/node/58).