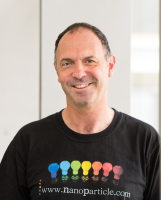 Position: Professor at the School of Chemistry and Bio21 Institute and Director of the Centre of Excellence in Exciton Science at the University of Melbourne, Australia

Education and Career Accomplishments:
Paul Mulvaney is Professor of Chemistry in the School of Chemistry and Bio21 Institute at the University of Melbourne. He received his Ph.D. degree at the University of Melbourne in 1989, working on surface electron transfer reactions with Professor Franz Grieser. He has worked as a research associate at the ANU Applied Maths Department (1988-89) and the Argonne National Laboratory in Chicago in 1986-87, 88. He was appointed as a research scientist at the Hahn-Meitner-Institute for Nuclear Research in Berlin from 1989-1992 with Professor Arnim Henglein, where he studied pulse radiolysis and the nucleation of nanocrystals. In 1993 he returned to the University of Melbourne as an ARC QEII Research Fellow, and he accepted a Faculty position in 1997. In 1999, he spent time in Palo Alto with Quantum Dot Corporation. He was a Humboldt Research Fellow in 2000 at the Max-Planck Institute for Colloids and Surfaces in Golm with Professor Markus Antonietti, and again in 2005 at the CAESAR Nanotechnology Institute in Bonn with Professor Michael Giersig. Between 2006 and 2010 he was an ARC Federation Fellow and from 2011 to 2015, he was an ARC Laureate Fellow. In 2009, Mulvaney was made a Fellow of the Australian Academy of Science and in 2014 a Fellow of the Royal Society of Chemistry in the UK. He currently chairs the National Committee for Chemistry.

Research activities:
His current research interests include the optical properties of single quantum dots, surface plasmon spectroscopy of single metal particles, nanocrystal based electronics, nanomechanics and solar energy conversion.  The Nanoscience Laboratory at the University of Melbourne focuses on the chemistry and physics of nanoscale materials, particularly optical properties. The Laboratory has 4 postdoctoral researchers and 12 Ph.D. students and group members come from numerous countries including Brazil, Venezuela, Germany, US.

Publication activity:
To date he has published some 230 scientific papers averaging around 100 citations per publication. His Hirsch-index is 103. Complete publications are available at the website: https://findanexpert.unimelb.edu.au/display/person1947#tab-publications.

He currently serves as an Associate Editor for the journal ACS Nano and is a member of the editorial advisory boards of Advanced Functional Materials, NanoToday, Journal of Physical Chemistry, Langmuir and PCCP.

From 2009-2011, he was Chair of the RACI Colloid and Surface Chemistry Division. In 2016, he became Director of the ARC Centre of Excellence in Exciton Science.

Paul has 5 patents in the field of nanoparticles that are commercially licensed.