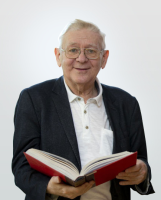 A. Fojtik graduated in the Faculty of Technical and Nuclear Physics (presently Faculty of Nuclear Sciences and Physical Engineering) of the Czech Technical University in Prague. During 1982 - 1994 he was one of the leading figures in laying down the foundations and subsequent development of quantum nanostructure studies at the prestigious research institution (Hahn-Meitner-Institut in Berlin). In the period 1994 - 1996 he devoted himself to the research of Si and Ge quantum nanostructures (e.g. studies of “luminous silicon” in the Institute of Physics in Garching, TU Mnichov). He realized middle and long term visits to several universities abroad (USA, Russia).

He is a member of several foreign scientific societies (New York Academy of Science, American Association for the Advancement of Science). He received quite a number of scientific and professional awards (e.g. for several times the prize of the Academy of Sciences of Czechoslovak Republic). He is an author of 5 patents (e.g. the Color Front of the National Theatre New Scene – for which he was awarded with state distinction).

More than 100 published original papers, number of citations (more then 2700). Hirsch Index – is of 22. He is being quoted as the very first researcher who started with experimental studies of nanostructures in the Czech Republic.

During the period 1986-88 his publications about the quantum nanostructures made from semiconductors obtained a very prestigious placement among the first one hundred most cited papers in the world (e.g. the 47th place according to the Current Contents citation analysis, Vol. 28, No. 48, 1988, pp. 3-13).

Presently, he is active in formation and educating physics of nanostructures as well as teaching topics like particle nanostructures, nanochemistry and nanophysics at the Faculty of Biomedical Engineering of the Czech Technical University in Prague and at the Institute of Engineering Physics for Biomedicine at the Moscow National Research Nuclear University (from December 2016). His current research interests are focused e. g. on smart nanotextiles for different applications, including biodegradable textiles for medical purposes (wound healing).

In June 2018 the new international award called Fojtik Henglein Prize for the outstanding, recent scientific breakthrough in the field of laser synthesis and processing of colloids in liquids nanotechnology research has been awarded to the first laureate. The prize reflects the pioneering work of Prof. Anton Fojtik and Prof.  Arnim Henglein (Germany) in the field of nanoparticle and nanostructure preparation using laser technology. The prize will be awarded every two years.