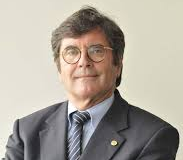 Positions: Chair of Applied Solid State Physics at Technical University of Berlin, Germany and Executive Director of "Bimberg Chinese-German Center for Green Photonics" of the Chinese Academy of Sciences at CIOMP Changchun, China

At the NANOCON´21 conference Prof. Bimberg will present a plenary lecture “Quantum Dot Flash: The Holy Grail of Nonvolatile Memories?”.

Personal Background and Education:
Dieter H. Bimberg (*1942) received the Diploma in physics and the Ph.D. degree from Goethe University, Frankfurt, in 1968 and 1971, respectively. From 1972 to 1979 he held a Principal Scientist position at the Max Planck-Institute for Solid State Research in Grenoble/France and Stuttgart. In 1979 he was appointed as Professor of Electrical Engineering, Technical University of Aachen. Since 1981 he holds the Chair of Applied Solid State Physics at Technical University of Berlin. He was elected in 1990 as Executive Director of the Solid State Physics Institute at TU Berlin, a position he hold until 2011. In 2004 he founded the Center of Nanophotonics at TU Berlin, which he directed until 2015. From 2006 -2011 he was the chairman of the board of the German Federal Government Centers of Excellence in Nanotechnologies.

Since 2018 he is Executive Director of "Bimberg Chinese-German Center for Green Photonics" of the Chinese Academy of Sciences at CIOMP Changchun.

Research Interests and main results:
His research interests include the growth and physics of nanostructures and nanophotonic devices, ultrahigh speed and energy efficient photonic devices for information systems, single/entangled photon emitters for quantum cryptography and ultimate nanoflash memories based on quantum dots.

Dieter H. Bimberg was the first bringing together theoretical and experimental insight to the electronic structure, the fundamentals of growth and the optical properties of quantum dots and QD based devices. His present research includes the growth and physics of nanostructures and nanophotonic devices, ultrahigh speed, photonic devices for the future Terabus and 100 G Ethernet, single/entangled photon emitters for quantum cryptography, all contributing to "green" photonics, showing minimum energy consumption. His team was the first to develop a 1 GHz single photon emitter based on a RCLED technology including oxide apertures. His work on the ultimate nanomemory based on quantum dots is in literature dubbed the "holy grail of memories".

Publication activity:
He has authored more than 1500 papers, 26 patents, and 7 books resulting in more than 61,500 citations worldwide and a Hirsch factor of 111.